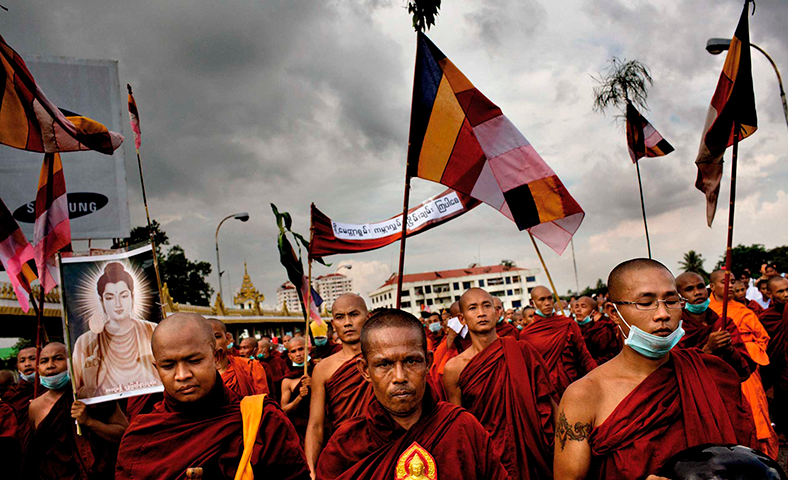 Monks protesting against the military regime during the Saffron Revolution, 2007 (© David Høgsholt).

Myanmar’s military receives arms and aircrafts from Russia and Belarus used against the widespread civilian resistance after the coup. At the same time nationalist monks provide spiritual support to the generals, and Buddhism played a crucial role in disrupting the ousted civilian government. The following is a brief analysis of how Buddhism functions in Myanmar’s politics.

In 2007, young monks demonstrated against the military and its mismanagement of Myanmar during the Saffron Revolution.  In their spiritual politics, many of these monks equated Buddhism with democracy as its Dhamma (doctrine) can be shared by all people. The core of Buddhism is non-violence, morality, loving kindness, compassion and charity. For the 2007-monks, metta (loving kindness) and righteous rule were their democratic response to the unjust and amoral military rule. They refused donations from military personnel. These monks and Daw Aung San Suu Kyi cited Buddhism’s ten duties of a righteous ruler: liberality, morality, self-sacrifice, integrity, kindness, restraint and austerity, non-anger, non-violence, tolerance, and forbearance or non-obstruction (non-opposition to the will of the people, in Aung San Suu Kyi’s version). Nevertheless, the demonstrations were stopped with violence by the regime, and monks were forcibly disrobed while chanting the metta sutta and jailed.[1]

Monks cannot participate directly in politics, according to the constitution, but they can criticize a government if they find that Buddhism is in decline. However, in 2012, Buddhism openly became part of the military’s nationalist politics after its proxy party, Union Solidarity Development Party (USDP), formed a Buddhist committee as preparation for future elections. The idea was to use Buddhism as politicized religion against Aung San Suu Kyi and outmaneuver spiritual politics.

The Organization for Protection of Race and Buddhism (Ma Ba Tha) is a countrywide organization of lay persons and monks supporting the military’s nationalism. It was formed in 2013-14. Its lay committees were crucial in supporting the anti-Aung San Suu Kyi propaganda and launching an anti-Muslim campaign. They collected a huge donation for a fence at the border with Bangladesh “to stop the invasion of Bengalis”. After the violent anti-Muslim riots in 2012-13, Aung San Suu Kyi said that human right violations had happened. This angered many nationalist monks who began to mobilize, supported by President Thein Sein and the military. These monks used Dhamma talks to spread their anti-Muslim propaganda. The monastic Dhamma Sunday schools were used by Ma Ba Tha monks for spreading islamophobia. During interviews with monks in Karen State and Mawlamyine, monks who were not Ma Ba Tha members shared the fear of Islam’s domination endangering Buddhism. [2]

The riots in 2012-13, the Rohingya crisis in 2016-17, as well as the four race protection laws against interfaith marriages and conversion, proposed by Ma Ba Tha in 2015, were part of a military-orchestrated campaign to create anxiety and paranoia in the population and within the National League for Democracy (NLD). Interfaith tensions contributed to disrupting NLD’s reform process.

Ma Ba Tha intervened in the elections in 2015 and 2020 urging people to vote for those who protect race and religion, i.e. the USDP. The monks accused Aung San Suu Kyi of ignoring the illegal Muslim immigration from Bangladesh and their claim that powerful and wealthy Muslims were going to rule the world in the 21th century, as the current Ma Ba Tha leader, the monk U Kawidaza, who received donations from Min Aung Hlaing after the coup, told this author in 2017. They have at least five wives and fifteen children, he added. Ma Ba Tha monks called Muslims “aggressive, destroying Buddhism, and endangering race” by forcibly marrying Burman women. One monk referred to this as “animalism”. People of “mixed blood” were deemed dangerous. In other words, such people created “disintegration of the national unity”. U Kawidaza has issued anti-Muslim rules in Karen State where he is a leading monk. Buddhist women are not allowed to marry Muslim men, and Buddhists cannot sell land and houses or trade with Kalar – a derogatory term for Muslims and Hindus. Meanwhile, the ethnonym Rohingya was dismissed as just a name and not an indigenous race.  They are Bengalis and immoral guests, another monk emphasized.[3]

During the Rohingya crisis in 2016-17 and the military’s ethnic cleansing operations evicting 750,000 Muslims, Min Aung Hlaing demanded that the National Defense and Security Council convened in order to declare a state of emergency. Aung San Suu Kyi refused to do this, angering the generals. In January, officers paid a gunman to assassinate Aung San Suu Kyi’s advisor, the Muslim lawyer U Ko Ni. A clear warning which created widespread fear in the NLD.

Senior General Min Aung Hlaing, head of the junta, accused Aung San Suu Kyi of not protecting race and Buddhism, and of ignoring the main national causes: “Non-disintegration of the nation and national solidarity, perpetuation of sovereignty and disciplined democracy – as well as enabling the Defence Services to participate in national political leadership according to the people’s desires”  (In Myanmar’s Constitution 2008). In his view, she did not acknowledge the military leadership in “national politics” (i.e. as above party politics) or protect “national unity”. In other words, she did not follow the military command stated in the Constitution.

Like his mentor and patron, General Than Shwe, Min Aung Hlaing has been active in Buddhist merit-making rituals since the coup. He began construction of the world’s largest marble Buddha statue. The patron of the project is one of Myanmar’s famous monks, the Sitagu Sayadaw, Ashin Nyanissara (aged 84). After the coup, the monk issued a letter with Ovada instructions (to kings or rulers). It had four instructions: 1) to stop killing civilians 2) to abstain from destroying and grabbing civilian property 3) to show loving kindness and compassion as a good Buddhist and 4) to follow the ten duties of a righteous ruler. He signed as Sitagu Ratthaguru – i.e. the general’s “Royal Advisor”.[4] This angered the Burmese public: Min Aung Hlaing is not their king and not righteous, and he does not follow such advice. On photos, the general is seen leading the old monk by his hand, both smiling. Since then, the general has hoisted pagoda finals (umbrellas) on pagodas, including one on an old royal pagoda in the ancient city of Bagan.

The Sitagu Sayadaw used to be a democrat but began to support the military around 2012, after the anti-Muslim riots. In 2017, Sitagu gave a Dhamma talk to a military garrison in Karen State. He cited the old Sri Lankan Mahavamsa chronicle saying that soldiers should not worry about killing non-Buddhists in defense of the nation and Buddhism. In the chronicle, a person who does not follow Buddhist morality is not a complete human being. Thus, killing in defense does not produce negative karma.

The political use of Buddhism by the generals aims at creating an image of a traditional legitimate ruler who shows his charisma and power by supporting and promoting Buddhism in splendid donation to monks and monasteries. However, many believe Min Aung Hlaing uses the rituals as a counter magic (yadaya) in order to avert bad fortune. During NLD’s government, the generals were said to be haunted by fear of losing power and wealth and of being punished if a civilian government gained the upper hand. The military’s Burman nationalism, including politicized religion, created a paranoid and violent atmosphere in civil society. After the coup, a profound fear exists within military ranks as they fail to gain control and suffer numerous casualties and defections. Thus, the generals will appear in more Buddhist rituals. Fear of losing power is a corrupting mechanism and corrupts Buddhism as well.

Buddhist monks have a considerable influence among Myanmar’s lay Buddhists. Many used to support Ma Ba Tha. However, Min Aung Hlaing’s religious practice will not convince the young generation Z who suffers from his violence. Many young monks are against the regime, but the elder leading monks have received lavish donations and honorary Buddhist titles from the generals, as for example the Sitagu Sayadaw. They will not split the monastic unity of the Sangha even if they oppose the atrocities.

Gravers, M. Forthcoming. “Dynamite, Armed Organisations and Monks: The Network Governing Karen State during the Ceasefire and after the Coup.” In Justine Chambers, Matthew Walton & M. Gravers (eds.): Ceasefire Aspirations and Anxieties Among the Karen in Myanmar. Copenhagen, NIAS Press.

[1] On the 2007 Saffron Revolution” see Gravers 2012.  Sutta (in Pali) means the Buddha’s discourse. Metta sutta is a sermon on sharing loving kindness to all living beings.

[3] On the Rohingya crisis, see Wade 2017 and Wai Moe 2021. Illegal immigration from Bangladesh was a problem due to corrupt official. This was made into an “invasion” by nationalists.

The volume Burma/Myanmar – Where Now?, which Mikael Gravers edited with Flemming Ytzen in 2014, offered crucial information and fascinating insights to the thousands of scholars, professionals and visitors flocking to the country for the first time as it opened up after decades of military rule. Indeed, it was TripAdviser’s #1 recommended book on Myanmar in 2015. Sadly, times have changed.

Picture: Monks protesting against the military regime during the Saffron Revolution, 2007 (© David Høgsholt).

You can find out more about which cookies we are using or switch them off in settings.

This website uses cookies so that we can provide you with the best user experience possible. Cookie information is stored in your browser and performs functions such as recognising you when you return to our website and helping our team to understand which sections of the website you find most interesting and useful.

Strictly Necessary Cookie should be enabled at all times so that we can save your preferences for cookie settings.

If you disable this cookie, we will not be able to save your preferences. This means that every time you visit this website you will need to enable or disable cookies again.

This website uses Google Analytics and Hotjar to collect anonymous information such as the number of visitors to the site, the most popular pages, and how the page is being used.

Please enable Strictly Necessary Cookies first so that we can save your preferences!